Cashing in on Cocoa Crop

SOWING SEEDS OF JOY IN PNG

Mari-Mari is the Tok Pisan word for Mercy. It’s also the name of a newly formed voluntary committee named after Mercy Works which hopes to serve the community through sustainable development in Iowara, located in the North Fly district of Western Province in Papua New Guinea.
For this remote and disadvantaged rural population, which lacks basic services like clean water and food, hope and mercy is often all there is.

Which is why the latest Cocoa Cash Crop initiative, which began as a tiny bud of an idea by our Mercy Works Project Coordinator in Kiunga, Steven Dude, is generating much excitement.

“People are full of joy when the MW Kiunga team is in their villages…. They feel our presence brings hope and satisfaction,” Steven says via zoom from Kiunga.

With cocoa bean production in PNG reaching 35,000 tonnes in 2021- and it being one of only 23 countries recognised by the International Cocoa Organization for its fine flavour, Steven is promoting cocoa as an alternative cash crop to support families.
His goal is to see 800 cocoa farmers in Iowara, each with between 300-500 cocoa trees on a two to three-hectare cocoa plantation, within a few years. So far they have introduced 18 varieties of cocoa buds, created from a clone seed in a mini-nursery, which will be planted every Tuesday and Friday.The buds are ready to be distributed for cultivation, with Steven anticipating 10,000 root stock will be planted.
The aim is to create a whole new economy for the impoverished area which faces many challenges including climate change, geographic limitations and difficulties accessing markets.
“We want to encourage our people’s participation meaningfully to make a positive living in a friendly and peaceful environment,” says Steven. “If people respect themselves and each other and work together to reduce poverty, we can work in partnership towards social prosperity.”
Steven says Mercy Works is helping to empower people to identify resources and strength within themselves, which enables them to sustain their living.
“We provide guidance and technical support to assist people, as they already have the potential but only need the skills and knowledge to transform to a better way to utilise resources within themselves. Here we encourage people to be more self-reliant to meet their daily needs.”
Villagers transport Cocoa seedlings on the river.Stuck in the mud! Pushing cocoa seedlings uphill. 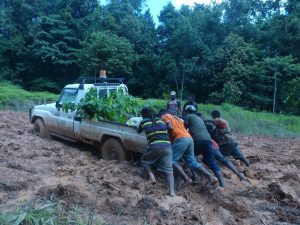 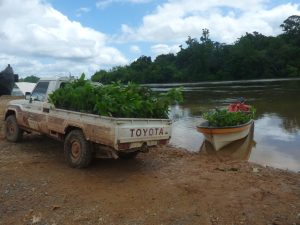 Cocoa bud seedlings loaded to be transported to Iowara for planting

Peace and prosperity were not always words associated with this region. It is home to over 10,000 West Papuan refugees who fled strife and sought protection in PNG territory in 1984 when the Indonesian military took occupation.

It has been a place of much civil unrest. According to Steven, himself a West Papuan Refugee, people were given land to cultivate and sustain their living.
Cocoa is farmed across the entire of PNG with at least 150,000 families relying on cocoa farming for their livelihood since it was introduced in the 1800s. A cacao tree takes up to three years to produce its first fruit known as a cacao pod.
Once their first pods are produced, farmers can harvest, process, and sell for cash.
*Tok Pisan is the local language in Papua New Guinea.
Read how Steven hopes he can continue Transporting Hope in the Iowara here:
Volunteer Now Contact Us Donate Now