COVID-19 Emergency: Responding to an Unfolding Tragedy on our Doorstep

The Mercy Works ethos: “Leave Mercy Works ethos: “Leave No One Behind” became a reality for our nearest neighbours in PNG when an Emergency Relief Appeal was made for urgent donations due to the growing COVID-19 health crisis. From the initial stage of the Emergency Response, through to its preparation, planning, execution, and distribution the call for help was answered.

The call out was swift and the response immediate: A heart-felt letter from Sr Maryanne Kolkia RSM, the In-country Coordinator of Mercy Works in Papua New Guinea, to Executive Director Sr Sally Bradley RSM came in April with the simple plea: We need your help.

In her letter, Sr Maryanne expressed the escalating need for Mercy Works Simbu, where she had begun work with Janet Andrew RSM, to address the food shortage in response to the COVID-19 pandemic. “The purpose is to feed oneself and the neighbour,” she wrote. “Marginalised people are the vulnerable senior citizens, those living with HIV/AIDS, those living with disability, and families with many children are the neediest at this time. All I am thinking is to feed the locals within clans, districts and towns, connecting people in the rural villages as well as families living in the settlements around the townships of Kundiawa.”

It was all that Australians needed to make a response. Within weeks Sr. Sally, together with Kathleen Donnellon (Board Chair) and the other directors, agreed to send an Emergency Relief Appeal Letter to all donors and supporters

To our delight, we received $116, 847 which was distributed across the Highlands (Goroka, Mt Hagen and Simbu), The Western Province (Kiunga and surrounding remote areas along the Fly River), and to the East Sepik Province (Wewak and outlying remote areas including Walis and Tarwai islands).

By July, $48,158 was sent as Emergency Relief to the Highlands, where efforts were made to transport produce to communities who would normally attend daily markets. Due to the virus, people were reluctant to attend markets in townships where it is more likely to contract COVID-19.

The ferocity of the outbreak exposed government corruption, economic mismanagement, and a fragile health care system. When the Government declared a nationwide lockdown in April, people were prevented from trading their agricultural products and for the unemployed, the vulnerable, the sick, people living with a disability, children and older people in squatter settlements and rural communities, accessibility to food was scarce.

The Mercy Works team on the ground set about mobilising food distribution through church and already established networks. Wholesalers and farmers from community organisations negotiated the selling price of vegetables, root crops and fruits. 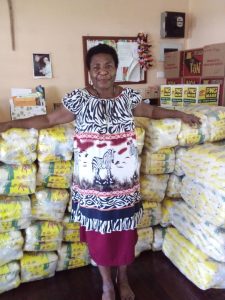 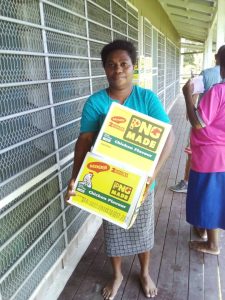 The method was effective. Families, individuals, and groups who Mercy Works was already in partnership with, took ownership of supplying garden produce to increase food production and supply. Word of mouth invitations to partner for food distribution were sent to village leaders which was “both exciting, encouraging, and inspirational,” said Sr Maryanne. “The public expressed a deep sense of gratitude and appreciation. Receiving food from Mercy Works was indeed a surprise, leaving them speechless.”

In Simbu, a verbal agreement was made between MW and the owners of truck drivers to mobilise people in their communities to transport garden food. 30 farmers from 15 villages, drivers of 10 trucks and three business houses and churches worked tirelessly towards meeting the demand. 90 ‘heaps’ of food for each clan, or organisation was distributed evenly to “shouts of joy and dance”  when their names were called.

In the Western Highlands Province, the Sisters distributed the food to the vulnerable and needy. Embracing the idea that ‘no one goes without’ the key was to “collaborate toward promoting no poverty, zero hunger, good health and well-being for all”. The successful mission saw every group fed, easing the burden, stress and anxieties of many who were unable to help themselves.

“Community mobilisation, collaboration and participation created an environment for people from all walks of life to work together in meeting each other’s needs in time of emergency,” said Sr Maryanne. “Sharing is a sign of caring for each other”. 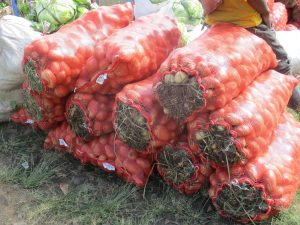 Meanwhile, along the International border and remote Iowara areas, the Emergency Relief support in Kiunga was also implemented. Here, Mercy Works Coordinator Steven Dude with the parish priest, community leaders and the village health volunteer developed an action plan to roll out the approved relief of $42,107 which encompassed supplies for water tanks to access clean and safe water. Tinned fish and staples were purchased for distribution.

Over in the East Sepik Province, eleven communities were identified by the Sisters to receive rations and materials for the emergency response of $26,582. Afraid to come near Wewak for marketing, in fear of the virus, access to clean water was hampered. Many women usually walk daily, quite a distance, to access water.

Here, Sr Rachael organised bulk buying to secure discounts for nine, 3,000 Litre water tanks. Boats were hired to transport the tanks to the two Island communities as well as road travel and boat hire to get to the Chambig Village on the Sepik River. The Sisters worked in pairs to take the tanks to their destination. Over a couple of weeks, bulk supplies of noodles, milk powder, tinned fish, rice and other groceries were loaded onto mini-buses and taken to places accessible by road. People worked together to distribute the supplies and set up and connect the water tanks to the roof of the building to collect rainwater.

The COVID-19 Emergency relief helped meet the urgent needs of 247,370 people. “Mercy Works lived up to its name,” smiles Sr Maryanne. “Communities were overwhelmed by the offer of support and expressed much gratitude.”

“A mutual respect among all people was established,” agrees Sr Rachael. “Emergency Relief makes people feel they are loved and taken care of in their needs.”