Earth Day – Investing in our Planet

It’s World Earth Day today and many of our projects have been feeling the impact of the environment in the past few years.

Pictured here are some of our girls from one of our projects in The Philippines, The Creating Change For Women Through Advocacy project in Cebu in The Philippines (run in partnership with The Villa Maria Good Shepherd Sisters) which gives the survivors of human trafficking a voice.
Here the girls, and some local girls, visited Mt Naupa, located in the city of Naga, and went mountain trekking.
“When we were on top of the mountain we perform the same rituals every year including planting a tree and doing Shibashi (a Tai Chi Qigong exercise routine),” says Arianne Nadela, the Program Coordinator at Good Shepherd HEART. 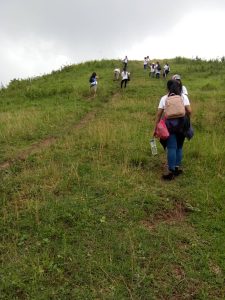 “Because you can see how the mountains are being destroyed by mining and we are looking at the wounded mother Earth on top of the Hills.”

Both our Cebu project and our other project in The Philippines, Balay Banaag – our residential centre for girls of prostituted women (run in partnership with Australian Marist Solidarity) – have seen the girls and women involved – as well as the teams we partner with –   still recovering from the devastating impacts of Super Typhoon Rai  (known as Odette locally) over Christmas last year.
The Typhoon ravaged the communities of Surigao Del Norte, Leyte, Negros, Cebu and Palawan when it hit on Dec 16th, 2021. In total, over 4 million people were displaced from the Typhoon, which was the strongest typhoon since Super Typhoon Haiyan, which hit in 2013.
Many of the most vulnerable are still trying to recover as their homes were damaged, and for so many, completely destroyed. 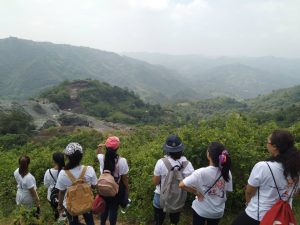 The typhoon also directly impacted our staff from Cebu. Many communities in Cebu City were without power or access to clean drinking water for almost three weeks.

The GSHEART aftercare compound was affected, the roof of the duplex where the program participants residents lived was destroyed and the women and our social worker had to face the rage of the storm bracing themselves inside the unit.

“They were able to evacuate in the seminar house on foot after the rage subsided,” our Project Coordinator, Sr Virgo Espineda RGS, told us at the time.

“The duplex was newly renovated in preparation for their upcoming renewal of license from the welfare agency and accreditation too.”

“Food was a most vital necessity during this time, so religious congregations opened their doors to share their water supplies and food to people in need,” she said.

“Lacking in response was the local government….Garbage piled up on sidewalks, water sources had to be initiated by the people, even cutting of trees, or electrical posts to make the roads passable became the people’s initiatives too.”

“Two septic tanks have been overflowing as a result of the last typhoon and is creating a bad smell,” reports one staff member. “The septic tanks are ten years old and new cemented safety tanks are required.”