Human trafficking is real. It has destroyed countless lives and families; it is a violation of human dignity, a crime, and a result of a complex set of circumstances. In the Philippines, human trafficking for sexual exploitation is especially prevalent among young women and girls, with Cebu City a major destination for sex tourism and international and domestic trafficking of children aged from 11 to 17 years old.

About 10,000 women are engaged in prostitution in Cebu and half are underage. They often suffer varied effects of abuse including repeated abortions, become HIV positive, suffer psychologically, experience violence and low self-esteem – all which makes them more vulnerable to further abuses. They are often recruited or taken against their will, forced into debt and drugs by perpetrators, are undocumented and threatened with imprisonment or deportation and can’t see a way to escape the cycle they are trapped in.

This year Mercy Works is proud to have expanded to partner with two new projects with women and girls who have experienced prostitution and human trafficking. One is in Mindanao, Balay Banaag, a residential centre run by the Marist Sisters to provide care and support for the daughters of females working in prostitution.

The other is the Creating Change for Women through Advocacy project in Cebu City in partnership with the Villa Maria Good Shepherd Sisters, who established Welcome House in 2007, and now have four centres that aim to raise the leverage of women who have exited from prostitution and survived human trafficking.

They offer temporary shelter, conduct outreach on the streets of Cebu and the red-light district, they refer clients to their long-term recovery center and help women re-integrate back into the community and gain employment. Their success rate is high.

However, this advocacy program, which started in September, hopes to give women a voice, to engage the community and raise awareness and educate future generations to end this modern-day slavery and create their own opportunities for development utilising advocacy.

Human trafficking usually occurs as a result of a process over the life course of the women and children, not the Hollywood stereotype so often depicted. Factors that push women and girls to become the victims of traffickers include poverty, rural isolation, violence and sexual abuse, lack of education and employment, dysfunctional family, cultural factors, and lack of information. The victims are vulnerable and exploited.

“My dream is for these women, who are victims of human trafficking for sexual purposes, to be heard,” says Arianne Nadela, social worker of 14 years and Program Coordinator at Good Shepherd HEART.

“Our hope is to be one as a group and heard because they are voicing out what they need through their own voices, so they can represent their situation and their life stories.”

The goal, says Sr Virgo RGS, the Ministry Development Coordinator of the project, is “to raise the level of society’s response on human trafficking and safeguard the right of women and children to live and enjoy a peaceful and secure environment”.

And while advocacy is an old strategy, the expression on how it will be conducted evolves. It is the women themselves who design, implement, and decide intended outcomes. Those who have experienced trafficking are our best teachers, that is what makes this project different.

“Change is empowerment,” says Sr Virgo. “This is changing the narratives from being project beneficiaries to project conceptualisers and implementers…if there is a chance to bring the women to a wider arena to other parts of the Philippines and even to the United Nations, to other countries to ensure that women’s voices will not only heard locally but also through the world since human trafficking is a worldwide phenomenon and needs the alliance from all people around the world.”

The advocacy is divided into six components including training women to become strong advocates against human trafficking; to spearhead a coalition of like-minded non-government organisations to recommend, reform and legislate; to engage stronger dialogues with local city officials and government institutions; to provide a mental health wellness program; to do research and really address the needs of victims and survivors and produce advocacy materials which better communicates their message.

In Cebu, Mercy Works seeks to listen to the experiences of these persons, accompany them in their personal journeys and develop with them holistic programs to meet their needs. We support women and girls in healing, self-sufficiency through employable skills, economic and personal growth opportunities, and reconciliation with often estranged families, adhering to our vision to partner with the most vulnerable toward opportunity, dignity, and self-reliance.

ONE SURVIVOR’S STORY: THE ROAD TO RECOVERY and ADVOCACY

As an 8-year-old, Mely was abused by her stepfather in the Philippines. He threatened her at knife point after she watched him rape her sister. When she confronted her mother and neighbours about it, she was placed into a Jesuit-run orphanage for seven years. 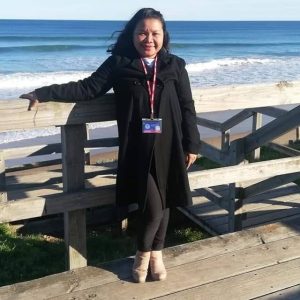 As a teen, she accepted an offer of laundry work and a free education from an “elegant woman visitor” who arranged transportation to Cebu, a city distant from her hometown.

Within hours of arriving in Cebu, she was forced to dress up and prostituted. “I cried, when she explained our real work,” says Mely through tears. “I asked her to take me back, I had no idea how this had happened.” She was forced to use drugs to stay awake all night and “improve the glum demeanour” she was told discouraged customers.

Mely begged for release but was told she had to pay for the transportation and other expenses incurred by her traffickers. She resigned herself to a life of prostitution. “I felt hopeless and worthless. I felt already ruined,” Mely says.

One day she woke up still high on drugs in her room and made herself a promise; she would have a future. She had met a compassionate man, who helped her escape. He had introduced her to the Good Shepherd Welcome House in Cebu and she knew she was finally ready to trust in others. With their help and five years of effort, she overcame her drug habit, finished high school, and trained to be a nurse’s aide. “I had to learn how to forgive myself and the people who caused me pain,” she says.

Mely is now an activist and survivor of sex trafficking in Cebu. She graduated from her bachelor in Science in Social Work and now serves as the Project Coordinator of Good Shepherd Welcome House for trafficked women. She has also spoken to the UN of her experiences alongside Sr Angela Reed RSM.

“I want to give them hope. I want to be an inspiration and give voice to all the abused women out there. I want to show them that if I could change my life, they can too,” she says.

“Four nights a week, I visit different areas to walk with girls, greet them, build relationships and tell them about our programs and services.

“I want to raise awareness and tell the world that my story isn’t just a story, it’s a reality.”