Silent Continuation of the Stolen Generation

DEMANDS FOR THE SA GOVERNMENT TO ACT FALLS ON DEAF EARS

“We demand an end to the arbitrary taking of our children and their placement in non-indigenous settings,” says one action of the 20-point statement, presented by members of the Nunga Babies Watch in partnership with the Grannies Group (respected Elders in the community).

“We are strongly and irrevocably opposed to the adoption of our children from non- kinship, out-of-home, residential care and/ or foster care. We do not want ‘assimilation’ of our children to continue, nor do we want a silent continuation of the Stolen Generation,” said the statement, presented by Ngadjuri woman Aunty Pat Waria-Read, at South Australian Parliament House in December.

In South Australia, one in every 11 Indigenous children lives in state care, and only 53% are placed with their family or kin. The latest report by the SA Guardian for Children and Young People shows the number of Aboriginal children in out-of- home care has increased from 4,370 children to 4,647 between June 2020
and June 2021, an increase of 6.3%.

Aunty Pat, who also heads our Mercy Works Salt N’ Pepper Adelaide project, a pre-release and post-release outreach program for Aboriginal women in prison, is disappointed the group have had no response.

“This is a national disgrace. Months later and there’s been no response from the Ministers, I thought there would be an uproar. It’s a continuation of the Stolen Generation.”

Included in their submissions is the call for an Independent Aboriginal Controlled Child Care Agency, and an Aboriginal panel to review decisions taken by the Department of Child Protection (DCP).

“The DCP has to be held accountable for its decisions in the taking away of our children. If an Aboriginal child can’t stay with their mother, follow the mother’s bloodline and you’ll find some-one who can look after that child.”

The Mercy Works Project came about after Aunty Pat, a former chaplain for the Department of Correctional Services, saw first-hand the DCP taking children away from their mothers while they are in hospital, or as soon as they are in jail, often presenting them with an order to take their children into residential care until they are 18 and without being informed they have a right to a lawyer.

Mercy Works is proud to partner with this project, along with our other six First Nations Projects, to work in partnership towards Closing The Gap and breaking the cycle.

You can read the full statement presented to parliament here: 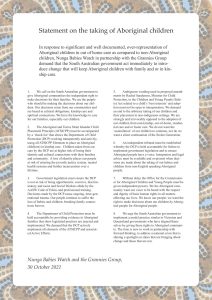